Home/Articles
The coronavirus outbreak could lead to 25,000 fewer cases of Invisalign being shipped to China from January to March but Align still expects worldwide sales growth of between 13% and 16% for the product during the first quarter. (Image: 1989studio/Shutterstock)

SAN JOSE, Calif., U.S.: Align Technology has reported its highest ever 12-month earnings but has begun 2020 with a degree of uncertainty. It says that the outbreak of the coronavirus could strip up to 25,000 cases from first quarter shipments.

Last year was a year of new records for the California-based medical device company that manufactures the Invisalign clear aligner system. Revenues for the 12-month period ended Dec. 31 increased by 22.4% on the previous year to reach a record $2.4 billion. At $2 billion, revenues from clear aligners made up around 83% of total revenues. Invisalign case shipments increased by 24.2% to a record 1.5 million cases—the company had never before sold this many Invisalign cases in a 12-month period—and revenues from the company’s iTero scanner and associated services grew by 38.5% to a new record of $381 million.

Align shipped 413,700 Invisalign cases in the quarter, which was a 23.9% year-over-year increase. At $543.6 million, clear aligner revenues for the quarter were up 22.0% year over year, and fourth quarter revenues from scanners and services increased by 20.2% year over year to reach $106.2 million.

Invisalign: A new milestone and growth in teenage cases

In a Jan. 29 conference call, CEO Joe Hogan pointed to strong Invisalign volumes as being behind the company’s record sales figures. “Our fourth quarter was a strong finish to a great year, with record revenues and volumes. [Fourth quarter] Invisalign shipments increased 23.9%, year over year, and [the quarter] marked another milestone with our 8-millionth Invisalign patient who started treatment in December. This rate of growth is really amazing to me, given our 7-millionth Invisalign patient was just this past March.”

Align saw a significant increase in teenage cases during 2019, and these accounted for a larger percentage of total clear aligner volume than they did in 2018. Worldwide, 447,000 teenagers were treated in 2019. This was an increase of 34.1% over the previous year, and it accounted for 29.3% of the company’s total clear aligner volume. In 2018, 333,000 teenagers were treated with Invisalign, and that represented 27% of total volume.

In the fourth quarter, around 116,000 teenagers started treatment with Invisalign, which Hogan noted was a 33.1% increase, year over year, and reflected strong adoption across all major regions. 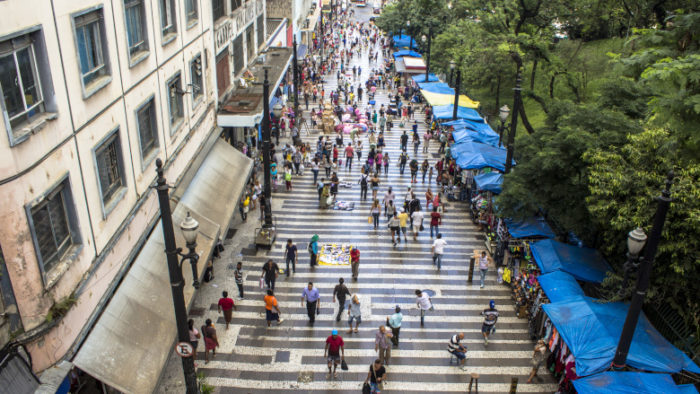 Invisalign volume in Latin America in the fourth quarter was up 79% year over year, led by strong demand in Brazil. (Image: Alf Rebiero/Shutterstock)

Fourth quarter shipments of Invisalign in the Americas region increased by 19.3%, year over year. Hogan said that this increase reflected growth in the adoption of Invisalign treatment by the region’s orthodontist and general dental practitioner channels—these were up 20.5% and 17.3%, respectively. Invisalign volume in Latin America was up 79% year over year in the fourth quarter, led by strong demand in Brazil.

Volumes for the full year in the EMEA region increased by 34.2%, led by Spain, Italy, France and what the company calls the “key expansion markets” of Turkey, Russia, and countries in the Middle East and Africa.

In the Asia Pacific (APAC) region, fourth quarter Invisalign shipments were up 28% year over year, led by demand in Japan, Australia, New Zealand and Southeast Asian markets. The ongoing trade dispute between the U.S. and China was cited as having been a headwind for the company in the APAC region because it created both economic uncertainty and affected the consumption of luxury goods. Despite this, Invisalign volumes for the full year in the APAC region increased by 33.7%.

“What is really exciting is to see that, within the Americas, 93.3% of [Invisalign] cases submitted by North American orthodontists are submitted digitally now” - Align Technology CEO Joe Hogan

Hogan said that Align trained over 5,500 new Invisalign dentists in the fourth quarter—3,400 of these were international dentists, of whom 55% were located in the EMEA region and 45% in the APAC region.

In the fourth quarter, 79.5% of all Invisalign cases were submitted using a digital scanner in the Americas region, up from 73.5% in the fourth quarter of 2018. “What is really exciting is to see that, within the Americas, 93.3% of cases submitted by North American orthodontists are submitted digitally now,” Hogan said. He added that he was pleased with the development of the iTero business and was confident that it will help to drive overall growth and increase adoption of the digital platform for Invisalign treatment.

Coronavirus affects outlook for the first quarter of 2020

The first quarter of 2020 is already underway, and Align said in its business outlook for this year that it expects to sell between 20,000 and 25,000 fewer Invisalign cases in China in the first quarter, owing to the outbreak of the coronavirus in Wuhan. The company is expecting a drop in revenues from Invisalign and its scanners and services of between $30 million and $35 million and further costs associated with the idling of manufacturing capacities in its Chinese plants. These costs are expected to be around $3 million to $4 million.

The company provided the guidance that it expects net revenues for the first quarter of 2020 to be between $615 million and $630 million—this would be an increase of between 12% and 15% year over year. Invisalign case shipments are expected to be in the range of 396,000 to 406,000, which would be an increase of between 13% and 16% over the first quarter of 2019. This guidance takes into account the aforementioned losses that are expected in cases and revenues, together with associated costs.

China is one of Align’s largest country markets and currently accounts for around 8% of the company’s total revenues.

Hogan said that, while being mindful of the impact of the virus on the company’s performance in the first quarter, he was confident about the future continued profitability and growth of its business in China and in the wider APAC region. He commented that Align would be in a position to handle potentially deferred cases, resulting in a mass spike in demand in China in a later quarter, but that he would not expect that delayed cases would all come at once. Any drop in cases in the first quarter would feed into latent demand, he said.

When questioned on the potential at Align’s training facilities in Shanghai and in Chengdu in the southwestern province of Sichuan, he said that it was difficult to speculate: “My anticipation is that, after the [New Year] holiday, you will just have to watch and see exactly what develops in the different provinces of China and exactly what that means.”

China is one of Align’s largest country markets and currently accounts for around 8% of the company’s total revenues.

In the conference call, Hogan said that he and his colleagues “are very concerned for the safety and health of our employees, customers, doctors and their patients in China. Their well-being is our top priority and we are doing everything we can to ensure that they are in good hands. We are working with our local team to donate medical supplies and provide funding to help combat the outbreak.”

The company announced on Feb. 2 that it would donate RMB 1 million ($144,000) to the Chinese Red Cross Foundation in support of its prevention and control efforts concerning the outbreak.

TEMPE, Ariz., U.S.: Align Technology sold a record 1.6 million cases of clear aligners in 2020—the same year in which most governments and businesses ...

WUHAN, China: The COVID-19 pandemic, which originated in Wuhan, has become a serious public health challenge of international concern. Researchers from ...

LEIPZIG, Germany: The SARS-CoV-2 pandemic has caused significant disruptions to the provision of dental care around the world. Patient volumes decreased by ...

GLASGOW, UK: Changing restrictions during the COVID-19 pandemic have regularly affected the scope of work that dental professionals have been allowed to ...

ST JULIAN’S, Malta: At the beginning of March, the European Aligner Society (EAS) announced that it was keeping a watchful eye on the situation regarding ...

LEIPZIG, Germany: Over the past month, one topic has dominated the international news cycle above all else—the Wuhan coronavirus outbreak. As of 10 ...

SHENLEY, UK: Last week, the public learned that a British national had died of COVID-19 on 11 March 2020 in Bali in Indonesia. Shortly afterwards, it became...

DARMSTADT, Germany: Software company exocad has announced that it is postponing its Insights 2020 event planned for mid-March owing to the accelerating ...

News Fri. 6. March 2020
KRAKDENT 2020 postponed to May because of coronavirus

CRACOW, Poland: Following current recommendations from state health institutions and after consultations with the director of the sanitary and ...

RIMINI, Italy: UNIDI, the Italian Dental Industry Association and organiser of Expodental Meeting in Rimini, has just announced that the 2020 event, which ...

Clinical performance of articulating paper during hyper-occlusion detection on implant supported prothesis: Does it always meet the dentist expectations?

Adapting to the Piezon PS - The no pain experience

My unexplored ways to work with die silicone