COVID-19 in 2020: Reflecting on the most difficult year in dentistry

As 2020 comes to a close, it is clear that the impact of the pandemic on dentistry will be long lasting. (Image: Kim Kuperkova/Shutterstock)

LEIPZIG, Germany: A team of World Health Organization (WHO) researchers will head to the Chinese megalopolis of Wuhan in January to further research the origins of the SARS-CoV-2 virus. More than 12 months after it was first reported to WHO, there is still much that we do not know about it. The virus made 2020 the most challenging year on record for dentistry. It brought equal measures of chaos and occupational and financial hardships, but dentists and the associations and companies that serve them responded with solidarity, with determination to serve patients and with resolution to stand up for dental care as an essential service.

Dental Tribune International (DTI) first reported on the SARS-CoV-2 virus on 5 February: Align Technology had said that it expected to sell significantly fewer clear aligners in China. Less than one week later—on 10 February—a second DTI report outlined early public and oral health responses to the outbreak, and highlighted emerging doubts about the viability of dental events that were set to take place on the Asian continent. The International Dental Exhibition and Meeting (IDEM), for example, was scheduled to be held from 24 to 26 April in Singapore, and the organisers of the event told DTI that “should a pandemic situation arise, we may reassess our position”.

With the benefit of hindsight, one cannot help but read statements such as IDEM’s with a latent sense of foreboding for what was to come. The first weeks of March brought a wave of postponements and cancellations that swept the international dental events calendar clean—EXPODENTAL fixtures in Madrid in Spain and in Rimini in Italy, KRAKDENT International Dental Trade Fair in Krakow in Poland, the European Aligner Society Congress in Malta, just to name a few. The outbreak had already spread to all continents except Antarctica by this time, and it had become clear that the influence of the virus on dental teams and the dental industry would not be fleeting.

The European Union took measures to safeguard supply chains for personal protective equipment (PPE) in mid-March, as a global shortage of surgical masks began to affect dentists in Japan, Australia, New Zealand, Canada and parts of the US. Australian Dental Association Deputy CEO Eithne Irving said in a statement that the association was doing everything it could to ensure that dentists could see patients. She pointed out, however, that “without a guaranteed supply of masks […] dental practices will be forced to close”. That was in mid-March—by the end of that month, many dental clinics around the world nonetheless faced de facto closure when governments suspended elective dental care. By early April, two-thirds of all dental offices in the US were closed.

“I felt that I had a duty to my staff, medical team and my patients to avoid the spread of the coronavirus” – Dr Miguel Stanley, Lisbon

DTI’s Nathalie Schüller spoke with dentists from around the world in April to find out how the historic practice closures were affecting dentists. Dr Miguel Stanley from Lisbon in Portugal told Schüller that he had closed his clinic voluntarily before closures became obligatory. “I felt that I had a duty to my staff, medical team and my patients to avoid the spread of the coronavirus,” Stanley said. In the two weeks prior to this, he had only seen four emergency cases. Dr Mauro Labanca, who lives and practices in Milan in Italy, told Schüller that his dental office had been closed since mid-March and that smaller dental offices would likely not survive the closures. Dr Irineu Gregnanin Pedron, a key opinion leader in dentistry from São Paulo in Brazil, explained that his clinic had been closed for two weeks. “Some patients have contacted us with possible emergencies […] we are advising patients by telephone and advising them to go to the emergency room at the hospital when there are no other possibilities for alleviating their problem,” Pedron said. 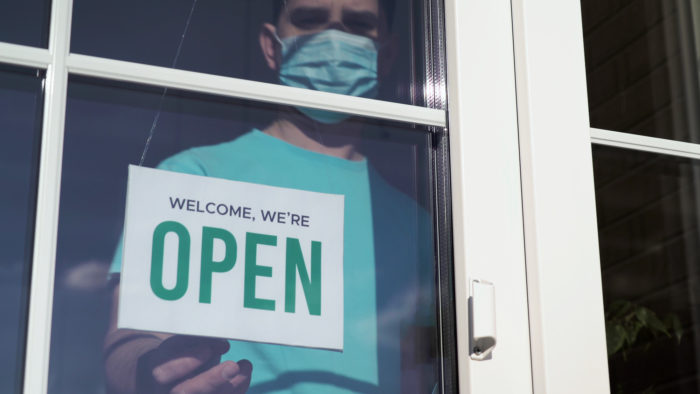 Dentists returned to work in many parts of the world in May and June. (Image: DimaSid/Shutterstock)

In May, dental companies began counting the staggering cost of practice closures. Henry Schein CEO Stanley M. Bergman did not mince words in a statement that read: “Due to the speed and severity of the COVID-19 healthcare and related economic crisis, this is one of the most trying moments in modern history for everyone.” However, a number of dental companies began to report unheard-of attendance figures for online educational offerings. More than 200,000 visits were recorded on the Straumann Campus online educational platform in the first weeks of the pandemic.

Dental clinics eventually reopened in a staggered fashion and the focus of oral health providers shifted to providing dental teams with the most up-to-date guidance on practising dentistry during the pandemic, the sourcing of PPE, SARS-CoV-2 testing and the development of vaccines. Governments and health bodies began to grasp the negative effects of the suspension of oral care after alarming reports surfaced out of the UK concerning DIY dentistry, treatment backlogs and the importance of oral health in the pandemic.

The incredible loss of human life has been underscored by the fact that thousands of healthcare workers have died from COVID-19. Dentistry was flagged as a high-risk profession in the first weeks of the pandemic, but the strict infection prevention measures that were already in place at dental clinics have prevented transmission in dental settings. Dental practices have remained open as record numbers of new infections continue to be recorded in the US and across Latin America and Europe, and dentists and dental associations have rallied behind calls for the continued provision of oral care as an essential service during the public health crisis.

Addressing the global dental community during the recent online DS World event, Dentsply Sirona CEO Donald M. Casey asked: “How can anyone not realise the importance and—more importantly—the expertise that you bring in order to treat your patients safely […] What is more important than oral health? Because we all know that oral health is the gateway to total health.” Casey’s sentiment has been echoed by dentists and dental associations around the world.

As 2020 comes to a close, it is clear that the impact of the pandemic on dentistry will be long lasting. Dental students, for example, have expressed fear they are lacking clinical skills owing to university closures. One dental student told DTI: “My concerns have risen regarding not being qualified enough as a graduate.” She added that she predicts that the pandemic will impact finances and employment rates. Dentists in the UK have adopted negative mental health attitudes towards the future and have expressed difficulty in coping with the uncertainty brought about by COVID-19. The approval of SARS-CoV-2 vaccines and a thriving online dental education sector are two positive signs that 2021 will also bring good news for dental teams.

The northern hemisphere winter months will be telling in terms of the coping abilities of state healthcare systems, the effectiveness of public health measures and the ability of dental teams to work through pent-up demand. DTI will continue to bring you the latest news on the SARS-CoV-2 pandemic and dental care as it breaks in the new year.

COVID-19 has had a significant impact on our professional life, yet the aftermath of the pandemic and its consequences for our future are still unclear. ...

BRASILIA, Brazil: From the start of the pandemic, the oral cavity has been highlighted as a potentially relevant infection axis with further inflammatory ...

COVID-19 has had an enormous impact on dental business, but its effects have varied among countries around the world. In this interview, Dental Tribune ...

In 2001, the concept of the human microbiome was first introduced by Joshua Lederberg. The microbiome consists of the entire genomic heritage of ...

WUHAN, China: As dean of the School and Hospital of Stomatology of Wuhan University, Prof. Zhuan Bian has had first-hand experience of the working situation...

LONDON, UK: Dental Protection says that the vast backlog in patient treatments—a lingering consequence of the pandemic—is negatively affecting the ...

News Wed. 6. January 2021
What is the future of telehealth in dentistry?

LEIPZIG, Germany: As a result of the SARS-CoV-2 pandemic, the vast majority of dental practices around the world have been partially or completely shut down...

CHICAGO, US: Similarly to other dental professionals, dental hygienists have been put in the spotlight during the COVID-19 pandemic owing to the belief ...