Home/Articles
News
A sharp upward trend in prescriptions of antibiotics to NHS dental patients between April and July this year has been described as a worrying and unintended consequence of the UK lockdowns. (Image: fizkes/Shutterstock)

LONDON, UK: According to a new study, dentists in England wrote 25% more prescriptions for antibiotics between April and July 2020 than they did during the same period in 2019. In London, the increase was 60%. FDI World Dental Federation has published a new white paper on how dental teams can contribute to reducing antibiotic resistance (ABR), and one of its authors has said that the profession has a clear responsibility to contribute to the fight against ABR at local, national and global levels.

Dental practices in England were instructed to suspend all non-urgent treatment between 25 March and 8 June this year as part of sweeping public health measures that aimed at combating the first wave of SARS-CoV-2. According to a new study published in the British Dental Journal, 80% of the antibiotics prescribed by dentists in the UK and the US before the pandemic resulted in unnecessary use that was not in accordance with guidelines. A downward trend in antibiotic prescriptions for National Health Service (NHS) dental patients in England was observed until March 2020; however, a sharp upward trend was recorded during the first months of the pandemic.

The total number of antibiotic items that were dispensed to NHS dental patients between April and July this year was 1,095,486—a 25% increase from the 878,993 that were dispensed in the same period last year. The largest increase in the monthly rate of antibiotic items provided per 1,000 inhabitants was recorded in London—where prescriptions spiked by 60%—and the lowest increase (less than 10%) was recorded in the south-west of England.

The study concluded that the increase in prescriptions could be attributed to restriction of access to dental care during lockdown. However, the authors noted that, even in normal circumstances, the unnecessary prescription of antibiotics to dental patients was a “complex behaviour which is influenced by a plethora of clinical and non-clinical factors which affect dentists and patients”.

The new study is a timely reminder that dental care contributes to the global public health threat posed by ABR. It was published shortly before the World Health Organization (WHO) marked World Antimicrobial Awareness Week from 18 to 24 November, during which FDI launched a new white paper that presents a framework that dental teams can use in order to help tackle the problem of ABR.

“We are staring down a long-term pandemic and urgent collective action is needed to slow it down” – Dr Wendy Thompson, academic and advisor to FDI

In a November editorial in the British Dental Journal, Dr Wendy Thompson, co-author of both the study and the FDI white paper, said that the increase in prescriptions by dentists had been a worrying and unintended consequence of the UK lockdowns.

“If ABR continues to increase, it has been estimated that, by 2050, infections resistant to drugs will be the number one cause of death globally, with ten million people dying every year,” Thompson wrote, adding that the effect of ABR on mortality rates was anticipated to be worse in low-income countries. She pointed out that dentists prescribe about 10% of all antibiotics for human use globally and that the increase in prescriptions that was experienced during the pandemic was therefore a huge concern.

“We are staring down a long-term pandemic and urgent collective action is needed to slow it down. Moving forward, the dental profession has a clear responsibility to engage, commit and contribute to global, national and local efforts to tackle ABR,” Thompson wrote.

Thompson drew attention to the white paper—The Essential Role of the Dental Team in Reducing Antibiotic Resistance—as being an important step towards optimising dental antibiotic prescriptions in order to help to preserve the effectiveness of antimicrobials. 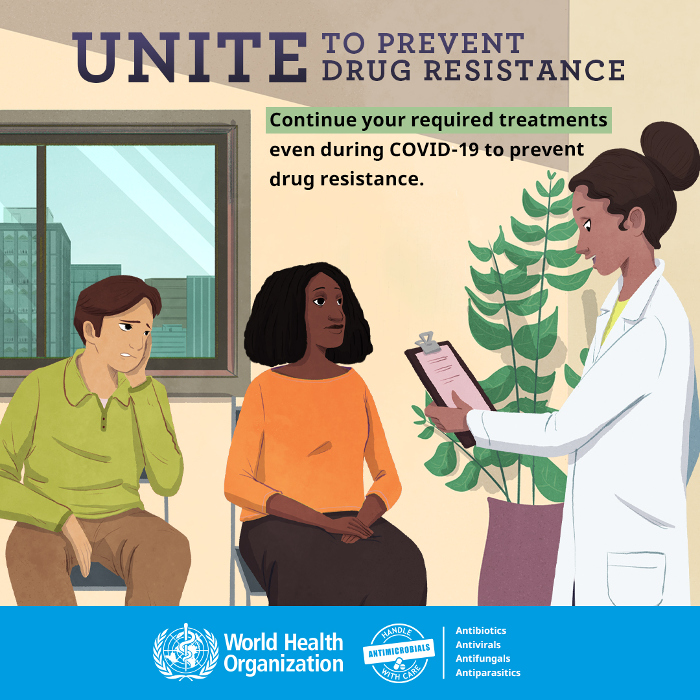 World Antimicrobial Awareness Week: WHO has called on all sectors—including food and agricultural organisations—to rally around a unified agenda to counter the public health treat of antibiotic resistance. (Image: WHO)

This year’s theme for World Antimicrobial Awareness Week for the human health sector is “United to preserve antimicrobials”, and WHO has said that the focus of this year’s campaign has been expanded from antibiotics to all antimicrobials.

A global plan to reduce the risk of resistance to antibiotics was endorsed at the 68th World Health Assembly in 2015. One of the key objectives of the plan is to use education and training to help increase understanding and awareness of antimicrobial resistance; another is to stop the emergence of drug-resistant infections by encouraging best practices among health workers, regulators and the general public. WHO has identified the SARS-CoV-2 pandemic as a potential risk, stating that the misuse of antibiotics during the pandemic could lead to the accelerated emergence and spread of ABR.

The study, titled “How did COVID-19 impact on dental antibiotic prescribing across England?”, was published online on 13 November 2020 in the British Dental Journal.

CHICAGO, US: Similarly to other dental professionals, dental hygienists have been put in the spotlight during the COVID-19 pandemic owing to the belief ...