BASEL, Switzerland: CEO Guillaume Daniellot has warned investors that the outbreak of the coronavirus in China is likely to dent its sales in the key Asia Pacific (APAC) region in the first quarter of 2020 by at least CHF 30 million.

Straumann announced its fourth quarter and full-year 2019 results this week, and Daniellot told listeners in a webcast conference call that the coronavirus, or COVID-19, is currently having a major impact on the dental business, including on its own operations. Travel restrictions are in place in most Chinese cities, and public hospitals and dental practices in the country are currently only treating emergency cases—most private dental practices remain closed. Daniellot said: “Based on current information, we believe that the impact of the virus could reduce our revenue in Q1 2020 by CHF 30 million [€28.2 million] or more. But as I indicated, we expect this business to be postponed, not cancelled.”

A drop of CHF 30 million in APAC revenue in the first quarter of 2020 would mean a downturn of around 37% from the CHF 81.1 million revenue posted in the fourth quarter of 2019.

The APAC region is Straumann’s third-largest and currently accounts for 19% of the group’s business. China is Straumann’s largest regional APAC market—followed by Japan and South Korea—and sales in the country earned the company CHF 166 million in 2019. In the wider APAC region, the company posted revenues of CHF 81.1 million for the fourth quarter and CHF 304.5 million for the 12-month period ended 31 December 2019.

Straumann has 350 employees in China, ten of whom are in Wuhan, the city where the outbreak originated. Daniellot said that no employees are infected and that the company has issued precautionary safety measures to its global workforce, including restrictions on travel to and from Asia.

The warning mirrors Align Technology’s recent forecast of a fall in Invisalign case shipments in China in the first quarter owing to the outbreak, and the two companies foresee similar falls in revenue.

Double-digit growth across all operating regions

Revenue for the fourth quarter was CHF 445.2 million, and revenue for the full year was just short of CHF 1.6 billion—a 17.1% increase in organic growth for both periods over the comparable periods in the previous year. This is remarkable because 2018 saw the group post its highest growth rates in 13 years. Core net profit for the full year reached CHF 338 million, up 15% over that reported for 2018.

Daniellot pointed out that the strong increase in organic growth (which is based on increasing sales and output and excludes profits attributable to takeovers, acquisitions and mergers) was due to double-digit growth being seen in all four of the group’s operating regions. 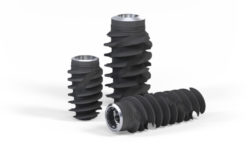 The BLX implant had been launched in markets in all four of Straumann’s operating regions during 2019. (Image: Straumann Group)

The Europe, Middle East and Africa (EMEA) region, which is Straumann’s largest and accounts for 42% of the group, saw full-year revenue of CHF 670.2 million and organic revenue growth of 13.4%. A solid performance in Germany, complemented by growth in Russia, Spain, Turkey and the Middle East, was noted as having attributed to the results, as well as sales of the BLX implant.

The North America region, which is home to 30% of the group’s business, saw organic revenue growth of 19.8%, and revenue for this region over the full year was CHF 481.6 million. Strong sales of the BLT and BLX implants and good progress made with the non-premium Neodent implant franchise were noted as having boosted performance in the region.

Full-year sales in the APAC region, which is Straumann’s fastest-growing and third-largest, recorded revenue of CHF 304.5 million and 21.5% organic growth. Organic growth for the fourth quarter in the APAC region was particularly strong—at just under 25%—and Daniellot said that this had been driven by sales of premium implants and value brands. Sales of Anthogyr were strong in China in the quarter, and Straumann rolled out its Neodent implant in Japan and Thailand.

Latin America, where 9% of the group’s business is located, contributed CHF 139.9 million in revenue for the full year, and organic revenue growth in the region was 16.8%. Daniellot noted that the region had had an “exceptional performance in an unstable environment” and that Neodent, the group’s biomaterials businesses, and ClearCorrect clear aligners had boosted results.

The global market for dental implants is estimated to be worth around CHF 4 billion—or CHF 4.6 billion including temporary abutments, copings and healing screws—and the market is currently growing by around 4–5% annually. Straumann is the market leader and has a share of 26% of all implant sales. The group launched a number of new implant solutions last year.

Launches for BLX are planned for the Turkey, Mexico, Colombia, Japan and South Korea markets this year and for Russia and China in 2021.

The premium BLX implant was launched in Australia and New Zealand in the first quarter, in most markets in the EMEA region in the first and second quarters, in Brazil in the second quarter, and in North America in the third quarter. More than 100,000 BLX implants were sold in 2019. Launches for BLX are planned for the Turkey, Mexico, Colombia, Japan and South Korea markets this year and for Russia and China in 2021, pending regulatory approvals.

The group has a 44% share of the premium implant market, and it says that gaining market share in the different tiers of the value implant segment outside of Brazil is an opportunity for it to increase its current 10% share of global value implant sales. In the first half of last year, Straumann invested in the South Korean company Warantec to boost its penetration into the non-premium implants segment and founded a new implant research and development subsidiary in Taiwan, where around 400,000 dental implants are placed annually. In the second half of the year, the group developed NUVO, a new tapered implant in the third-tier value segment that will be manufactured in Brazil and launched in Latin America in the first quarter of this year.

Capital expenditure at Straumann in 2019 was CHF 150 million, its highest to date. This included expanding production capacity by an expected 35% at its Curitiba plant in Brazil, where the Neodent and NUVO implants and Clear Correct clear aligners are made.

The company also made a range of acquisitions in its materials supply chain, including the acquisition of the US thermoplastics maker for orthodontic applications, Bay Materials, and the biomaterials company Yller Biomaterials.

Can Straumann keep on growing?

Straumann holds a 6% share of the global dental market and is the sixth-largest dental company in the world. In the past five years, revenues and profits at the company have doubled and the number of staff members it employs has tripled. In 2019 alone, Straumann created 830 new jobs and this, plus acquisitions, saw its global workforce increase to 7,590 from 6,882 in 2018. The question is, can the group continue to grow at such a rate?

“[We] expect the dental implant market to continue growing at about 4–5%. And we are confident that we can continue to gain share by achieving organic growth revenue in the low double-digit percentage range” - Straumann CEO Guillaume Daniellot

Clear aligner case starts were up by more than 60% in 2019, and the group says that its investment in growth segments such as clear aligners and value implants will enable it to keep posting figures in the green.

Providing guidance for the current year, Daniellot said: “[We] expect the dental implant market to continue growing at about 4–5%. And we are confident that we can continue to gain share by achieving organic growth revenue in the low double-digit percentage range.”

He added, “As we continue to invest in sales and marketing and research and development, we expect the core EBIT [earnings before income and taxes] margin to be stable, excluding the impact of currency fluctuations and the coronavirus.”

Related Articles
News Fri. 6. March 2020
KRAKDENT 2020 postponed to May because of coronavirus

CRACOW, Poland: Following current recommendations from state health institutions and after consultations with the director of the sanitary and ...

CHARLOTTE, N.C., U.S.: CEO Donald M. Casey says that he does not anticipate disruption to the company’s supply chain, but a drop in sales in China, Japan,...

SHENLEY, UK: Last week, the public learned that a British national had died of COVID-19 on 11 March 2020 in Bali in Indonesia. Shortly afterwards, it became...

Dental Tribune International (DTI) recently had the opportunity to speak with Dr Sushil Koirala, the founder and chairman of National Dental Hospital and ...

COVID-19 has had an enormous impact on dental business, but its effects have varied among countries around the world. In this interview, Dental Tribune ...

CHICAGO, US: Similarly to other dental professionals, dental hygienists have been put in the spotlight during the COVID-19 pandemic owing to the belief that...

According to the World Health Organization, Italy is now second to Spain in the European region in terms of reported COVID-19 cases and first when it comes ...

As of today, Italy has had the highest death toll of any country impacted by the coronavirus. According to the latest numbers available from the Johns ...

In the light of the global COVID-19 outbreak, Portugal declared the national state of emergency on 18 March. So far, over 9,000 cases and more than 200 ...

Like many other countries worldwide, Lebanon is currently struggling with a rapid spread of the coronavirus (COVID-19). By 8 April, the Johns Hopkins ...

Whole Body Health – what do we know and where are we going?

Ecosite Elements – The beauty of simplicity

Getting Real About Digital Dentistry: Optimizing Your Digital Equipment