Home/Articles
News
New surveys have highlighted shortfalls in the UK government’s PPE supply, and the concerns of dentists relating to investigations into complaints about dental care, during the pandemic. (Image: T H Shah/Shutterstock)

LONDON, UK: Practices in the UK remain open during the current lockdown, but dentists in the country have reported increased concerns related to other aspects of the SARS-CoV-2 pandemic. Two in five dentists (40%) say that they fear future investigations relating to the disruption of dental care during the lockdown, and more than a third (35%) say that problems with the supply of personal protective equipment (PPE) is affecting their ability to see more patients.

An October survey conducted by the British Dental Association (BDA) found that obtaining PPE was the greatest obstacle that UK dental clinics had to overcome in order to increase patient capacity when they reopened in June. The survey found that, in October, 35% of clinics across the UK still cited limited access to PPE as having a significant impact on their ability to see more patients.

The BDA shared these latest survey results upon the release of a report by the National Audit Office (NAO). The NAO report examined the government’s preparedness for the pandemic and its emergency response to PPE shortages and found that, whereas the government had placed emphasis on compliance and speed of acquisition and delivery, more transparency and safeguards were needed. Among its findings, the NAO noted that plans to distribute PPE during a pandemic needed to include distribution of items to all sectors of the health system and that two-way information and communication channels were needed to manage the response at a national level.

PPE shortages across the UK in March led to the creation of a parallel supply chain by the Department of Health and Social Care, which spent £12.5 billion (€14.0 billion) on 32 billion PPE items between February and July 2020. Procuring the same PPE items at 2019 prices would have cost the government around £10 billion less, the report found. 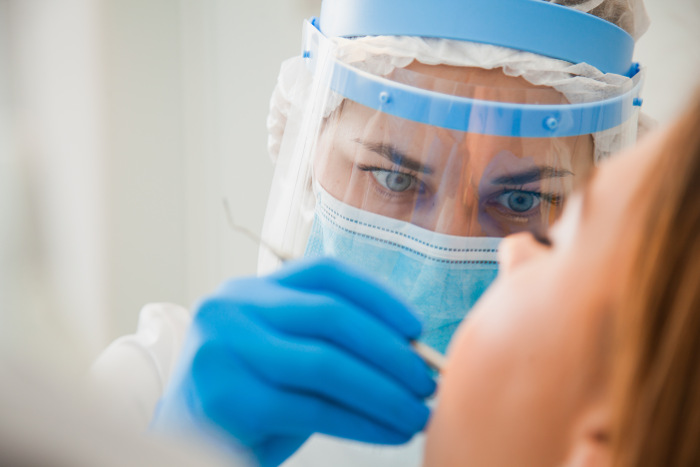 A report by the National Audit Office found that the PPE items procured by the UK government between February and July 2020 could have been purchased for around £10 billion less in 2019. (Image: klyots/Shutterstock)

Dental Tribune International (DTI) previously reported that millions of UK residents had missed dental appointments since the beginning of the pandemic. The BDA estimated the total of missed National Health Service dental appointments at nine million, and it said that many practices are still addressing pent-up urgent dental care as they struggle to increase patient volumes.

The chair of the BDA’s Principal Executive Committee, Dr Eddie Crouch, said in a media release: “Every health professional requires assurances that processes are now in place to ensure low-cost, high-quality kit makes it to the front line.” He commented that PPE shortages “have dogged dental services since the outset of the pandemic” and that the back-log of dental care now faced by UK dentists showed that the government had failed to plan for and procure the equipment that was needed to protect patients and staff.

“Issues were identified with supplies in early February, but the message from government was keep calm and carry on. We are still living with the consequences,” he said.

Dental Protection has called on the General Dental Council (GDC) to take the context created by the SARS-CoV-2 pandemic into account when considering complaints about dentists and dental care. It has also called for the Professional Standards Authority (PSA), which oversees UK healthcare regulators, to consider providing more detailed guidance for any future investigation that it may conduct.

“The prospect of a regulatory investigation down the line is clearly taking its toll on dentists’ mental well-being” – Dr Raj Rattan, dental director at Dental Protection

Dr Raj Rattan, dental director at Dental Protection, commented in the statement: “We are particularly concerned to see that fear of regulatory investigation due to COVID-19 disruption has increased since we surveyed our members back in May.” He said that concerns about decisions that were taken in situations that were beyond the control of dentists were exacerbating the elevated stress levels that they were already experiencing.

“We feel the GDC could do more to reassure dentists and reduce the stress this is causing. In September, the [General Medical Council] issued specific guidance for its staff detailing how to take the context created by COVID-19 into account when considering complaints about doctors. While we have some concerns as to whether this guidance will stand the test of time, it was a welcome gesture and offered much needed reassurance to doctors. The GDC could consider something similar and we will continue to engage with them on this,” Rattan said.

“The prospect of a regulatory investigation down the line is clearly taking its toll on dentists’ mental well-being, and we hope that both the GDC and the PSA will consider what more can be done to reassure dentists who are doing their very best for their patients,” he concluded.

GDC Executive Director John Cullinane told DTI, however, that the organisation had made it clear that factors relating to the pandemic would be taken into account. “In March of this year we, along with the other professional health and care regulators, made a commitment that environmental and human factors relating to COVID-19 would be taken into account in fitness to practise investigations and we stand by that commitment as we have throughout.”

Cullinane continued: “We continue to make this clear in all our discussions with stakeholders and it is disappointing that any of them would imply that there is cause for concern. This has been, and continues to be a challenging time, and we all have a shared interest in providing reassurance that professional judgements will always be looked at in the context in which they were made. As long as professionals assess risk appropriately, and make professional judgements accordingly, there should be no reason for concern. Our fitness to practise decision-makers are aware of our commitment and we continue to review our guidance to them to ensure they have a lasting point of reference.”

Editorial note: The British Dental Association survey received 1,337 respondents—which represents around 11% of the estimated total of 12,000 UK dental practices—and was conducted on 14–26 October 2020.

BOSTON, US: During the pandemic, the majority of dental professionals had to cease their dental activities in order to slow down the spread of COVID-19. The...

ISLAMABAD, Pakistan: A study led by researchers at Shaheed Zulfiqar Ali Bhutto Medical University in Islamabad has examined the impact of the SARS-CoV-2 ...

Dr Eric Block is a full-time practising dentist in Acton in Massachusetts in the US. A few years ago, he became overwhelmed by the amount of stress that ...

SHANGHAI, China: Given that SARS-CoV-2 originated in China, it is understandable that the nation’s emergency dental care providers have experienced an ...

News Wed. 19. August 2020
Interview: “Our purpose is to provide emotional first aid for dentists in distress”

Dentistry can be a stressful profession in which the importance of mental health is often overlooked, and the uncertainty about where to seek help can be ...

LEIPZIG, Germany: Dentists have resumed the provision of patient care, but are experiencing great anxiety arising from extensive changes to the workflow and...

Dentists often work in competitive markets and struggle with growing their dental practices. To receive specialist advice and improve efficiency in the ...

Whole Body Health – what do we know and where are we going?

Ecosite Elements – The beauty of simplicity

Getting Real About Digital Dentistry: Optimizing Your Digital Equipment