How is COVID-19 affecting the dental industry?

Home/Articles
The ongoing coronavirus outbreak has spread to all continents excepting Antarctica, and its impact has been deeply felt by the dental world. (Image: Viacheslav Lopatin/Shutterstock)

LEIPZIG, Germany: Months after it was first detected in Wuhan, one of China’s largest cities, the effects of the ongoing coronavirus (since named SARS-CoV-2) outbreak are increasingly being felt across the globe. By 10 March 2020, 114,567 confirmed cases of COVID-19, the disease this coronavirus causes, have occurred across all continents outside of Antarctica, and 4,027 deaths have resulted from it. With the outbreak set to intensify over the coming weeks and months, it is time for an update on what the carry-over effects have been for the dental industry.

A multitude of dental events throughout Europe have been postponed in light of the coronavirus outbreak. For example, the company exocad, which was recently acquired by Align Technology, announced that its Insights 2020 event would be pushed back from mid-March to September. Meanwhile, the third congress of the European Aligner Society, which was set to take place in Malta from 19 to 21 March, has been moved to November. 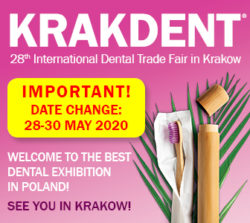 KRAKDENT 2020 is one of many dental shows to have been postponed due to the coronavirus outbreak. (Image: KRAKDENT)

KRAKDENT 2020, the largest dental show in Poland and an event that attracts 15,000 visitors from all over the world, has likewise been rescheduled. Though there have only been 17 cases of COVID-19 reported in Poland so far, the deferment is in line with many countries’ guidance regarding mass gatherings and the risk these possess for disease transmission.

In Spain, the biennial EXPODENTAL Madrid has been postponed while UNIDI, the Italian Dental Industry Association and organiser of Expodental Meeting in Rimini, also announced that its event would be shifted from May to September. Italy has by far the most cases of COVID-19 of any country in Europe, 9,172 having been recorded by 10 March, causing the government to place the entire country under lockdown.

Effects felt across the world

A virus of this nature has not just had an impact on the European dental world, however. By and large, dental congresses in China have been postponed, often without a confirmed rescheduling. The Dental South China International Expo and Conference and the China Northeast International Dental Equipment and Symposium on Oral Health are just two of the country’s dentistry-focused events that have been placed on the back burner indefinitely.

IDEM Singapore 2020 has been rescheduled from April to June. (Image: EQRoy/Shutterstock)

In addition, Koelnmesse and the Singapore Dental Association (SDA), joint organisers of IDEM Singapore 2020, announced that the dental event would be delayed until 19–21 June, a decision that followed guidance from Singapore’s Ministry of Health.

“In light of the current situation, it is important for us to make decisions in the best interests of our attendees, and we will continue to listen to and work closely with our partners to create a successful event,” Dr Lim Lii, president of the SDA, clarified in a press release.

Other events have had to be shelved entirely owing to concerns about the virus’s ease of transmission. The US-based Academy of Osseointegration announced the cancellation of its annual meeting, set for 18–21 March, just two weeks before the conference was scheduled to begin.

It remains to be seen whether other major dental events taking place later in the year will be affected by the SARS-CoV-2 outbreak. FDI World Dental Federation is set to host its annual World Dental Congress in Shanghai in China this coming September and, in an announcement early last month, stressed that the “safety and security of all those taking part in [the] congress is always our primary concern”.

“We continue to monitor developments in China and are in close contact with our local partners to assess the situation daily. Currently, the congress is scheduled to take place as planned as we anticipate the situation will be under control by this time,” FDI continued.

The widespread disruption caused by the coronavirus has also had carry-over effects for many of the dental world’s biggest companies. In a webcast conference call, the Straumann Group CEO, Guillaume Daniellot, announced that the outbreak was likely to dent its sales in the Asia Pacific (APAC) region in the first quarter of 2020 by at least CHF 30 million (€28.36 million). The APAC region currently accounts for 19% of the group’s business, and China is the largest national market in this region for Straumann.

Dentsply Sirona, another giant of the dental business, recently predicted that its sales in the Chinese, Japanese, South Korean and Taiwanese markets would fall by a cumulative US$60–70 million in the first quarter of this year. “As it is the case across all industries, our commercial operations in China and now in [other] areas are being affected by this fluid public healthcare situation,” remarked Jorge Gomez, Dentsply Sirona’s chief financial officer.

Gomez added that the spread of the virus is resulting in a slowdown in both the dental consumables and technology and equipment segments and that the recovery of sales in the following quarters in affected markets is currently difficult to predict. “At this point, it would be very hard for us to go beyond the first quarter,” he commented.

As reported by Dental Tribune International, the clear aligner manufacturer Align Technology also announced in a conference call that it expects to sell between 20,000 and 25,000 fewer Invisalign cases in China in the first quarter of 2020. Further costs associated with the idling of manufacturing capacities in Align’s Chinese plants are expected to be around US$3–4 million.

What can we expect?

At this stage, it’s difficult to predict what the cumulative effect of this coronavirus outbreak will be on the dental world, since it is still very much a developing issue. More places may enforce the severe travel restrictions that countries like Italy, China and South Korea have put in place should they too become subject to epidemics.

It is clear, however, that, as more upcoming dental events are cancelled or postponed owing to safety fears arising from the virus, the importance of digital marketplaces such as DDS.WORLD will continue to increase by providing a portal for dentists that simplifies access to the kinds of products, equipment and supplies that keep dental practices running.

Dental professionals who tend to conduct their continuing education at the events of relevant organisations and associations may also find themselves in a bit of a bind. In these instances, e-learning platforms like DT Study Club can play a valuable role by providing interactive live webinars and lectures that are accessible remotely and at any time.

One thought on “How is COVID-19 affecting the dental industry?”

Related Articles
News Wed. 1. April 2020
This is how SARS-CoV-2 is affecting dental businesses in Switzerland

BERNE, Switzerland: The virus SARS-CoV-2 has a firm grip on the world and is affecting how people live their daily lives. In Switzerland, as in many other ...

The recent escalation of the COVID-19 situation has definitely affected every domain of human life. The sudden surge has raised fears that the outbreak ...

In 2001, the concept of the human microbiome was first introduced by Joshua Lederberg. The microbiome consists of the entire genomic heritage of ...

COVID-19 has had a significant impact on our professional life, yet the aftermath of the pandemic and its consequences for our future are still unclear. ...

News Wed. 18. November 2020
How to protect patients and personnel from COVID-19

Infection control and prevention measures commonly observed in the dental practice are safe and effective, but hygiene routines need to be known, understood...

LEIPZIG, Germany: After months of hoping and waiting, the news finally broke at the end of 2020 that a number of vaccines for SARS-CoV-2 had been developed ...

News Fri. 13. August 2021
COVID-19 and the dental market: The pandemic continues to bite

LEIPZIG, Germany: Sales at major dental companies climbed in the second quarter of this year compared with the same period in 2020, during which the ...

SYDNEY, Australia: Though Australia and New Zealand have, thus far, been able to avoid the worst of the COVID-19 pandemic, both nations’ economies have ...