Safer dental clinics are just a swab away: Testing patients for SARS-CoV-2

LANSING, Mich., U.S.: Allowing dental professionals to test their patients for SARS-CoV-2 would decrease the high risk of transmission of the virus in dental clinics. Furthermore, dentists in some jurisdictions are now being prevented from performing elective treatment if their patients have not tested negative for the virus. Dental Tribune International (DTI) spoke with a Michigan State University (MSU) researcher who has developed a point-of-care testing kit that would be suited to dental settings.

Dentists in Japan now have authorization to take nose and throat swabs so that patients can be tested for SARS-CoV-2, and U.S. dental organizations have issued an urgent call to get testing kits into clinics throughout the country.

As this story went to press, a mandate to restart elective medical care in Alaska effectively ruled out the broad recommencing of elective dental care because it stated that patients must return a negative test result for SARS-CoV-2 within 48 hours prior to a procedure that generates aerosols. The Alaska Board of Dental Examiners asked state regulators for dentists to rely instead on strict patient screening protocols, but this was rebuffed by the state’s chief medical officer, Dr. Anne Zink. “It’s increasingly challenging to identify COVID patients,” she told local radio broadcaster KTOO. “This is an incredibly sneaky disease that appears to be most contagious in the pre-symptomatic or early symptomatic people with symptoms that can look almost like anything else.”

Alaska is one of the first U.S. states to reopen nonemergency health services, but may not be the last jurisdiction to place its dentists in a paradoxical situation where they are unable to treat patients without proof of a negative test result, yet are not in a position to administer the tests themselves.

The urgent need for such testing kits has led to a flurry of activity by test developers, such as Dr. Brett Etchebarne, who runs the Etchebarne laboratory at MSU College of Osteopathic Medicine, where he is also assistant professor of emergency medicine. Etchebarne has developed an in vitro diagnostic test, one variation of which has been developed to suit smaller health practices such as dental clinics and could easily be administered by dental teams.

“I do believe that the possibility exists for the dental practitioner and his or her staff to take a sample from a patient while in the waiting area getting ready for treatment” – Dr. Brett Etchebarne, assistant professor of emergency medicine, MSU

“Dentists have the necessary protective equipment to begin with, and they are working in the oral care area already, and so everything fits together quite easily,” Etchebarne explained. “Dentists already have autoclaves and already do limited kinds of analytics. I do believe that the rapid process in which my test is able to be completed allows for a solo practitioner, or a technician, to easily take the swab and easily lyse the sample so that it is no longer an infectious, dangerous pathogen. That sample can then be analyzed using a molecular technique that can be run on a digital drive app or hot plate, which you could easily work into a dental clinic or office. So, I do believe that the possibility exists for the dental practitioner and his or her staff to take a sample from a patient while in the waiting area getting ready for treatment.”

The reverse transcription polymerase chain reaction test is administered using a swab, and the results can be ready within 15 to 20 minutes, allowing patients to proceed with their appointment, Etchebarne said.

With masks and other items in short supply, the ability to administer tests in dental clinics ideally would require minimal additional personal protective equipment. Etchebarne commented that samples are deactivated in the medium that is used for analysis, meaning that samples could be safely handled using standard protective equipment. “Dentists are already covered pretty well here, so we are not looking to add too much to the equation. All of the equipment used for the tests would be consumable and disposable, so that the risk of further transmission of infection is really obviated.”

Etchebarne and his team have developed variations of the test that use nasopharyngeal or oropharyngeal swabs, and they are working on a saliva sampling method that would remove the need for a swab altogether. When DTI spoke to Etchebarne on April 28, he said that he was currently awaiting emergency authorization from the U.S. Food and Drug Administration (FDA) for the test.

“I am hoping that we will have all loose ends tied up in the next few weeks, and that a whole new platform will be available to people, which I think is going to be quite exciting, based on our analysis and all that we are hearing from the various collaborators and helpers that we have had in order to make this product available,” he said.

What testing methods are available? 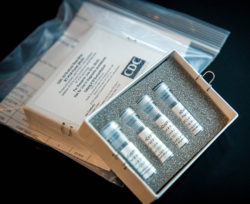 Currently, there are four main approaches for testing for SARS-CoV-2. Reverse transcription polymerase chain reaction (RT-PCR) tests rely on respiratory samples that are obtained through methods such as nasopharyngeal swab taking. If the virus has progressed from the throat to the lungs, sputum samples are recommended. This method is being widely used in affected countries, and the time required for laboratories to return results from RT-PCR varies from a few hours to two days.

Antigen tests detect proteins from the surface of the virus—typically the spikes on the surface—from samples that are collected in the nasal cavity. The scalability of antigen testing, relative to RT-PCR or isothermal amplification methods, has resulted in this method being touted as a solution for the mass testing that countries may require before they can reopen their economies and education systems completely. These tests may however be less effective in testing asymptomatic individuals.

Serological tests detect antibodies in a blood sample that the body produces in order to fight the virus. This testing method could be useful in measuring the percentage of a population that has contracted and may therefore be immune to the virus.

Demand for SARS-CoV-2 testing kits has led to the sudden emergence of a commercial market for testing kits that American Dental Association Executive Director Dr. Kathy O’Loughlin dubbed the Wild West. In mid-April, O’Loughlin commented that “all dentists need a fast point-of-care test that accurately predicts the presence or absence of COVID-19 virus in real time. Unfortunately, very few tests have met a high standard for specificity and sensitivity, which means a potential for high rates of false negatives and false positives,” she warned.

5 thoughts on “Safer dental clinics are just a swab away: Testing patients for SARS-CoV-2”

WASHINGTON, U.S.: A consortium of U.S. dental organizations has asked for federal authorization for licensed dentists to conduct SARS-CoV-2 testing in their...

LEIPZIG, Germany: Researchers in India have found that scientific literature supports salivary diagnostics for SARS-CoV-2 infection as an alternative to ...

BRUSSELS, Belgium: The provision of oral healthcare services has been severely affected all over the world by the SARS-CoV-2 pandemic because of the risk of...

LONDON, UK: Despite dental settings presenting a significantly elevated risk of infection for those in and beside the chair, testing patients for the ...

BIETIGHEIM-BISSINGEN, Germany: Owing to the large number of patients seen in dental practices, there is always a danger of coming into contact with an ...

CHICAGO, U.S.: In the face of the COVID-19 pandemic, dentists have been provided with strict infection prevention and control guidelines. These include ...

SACRAMENTO, Calif., U.S.: Dentistry has recently topped the list of the most dangerous jobs for risk of SARS-CoV-2 transmission, and although dentists are ...

CHICAGO, U.S.: In a recent study, researchers have examined the prevalence of COVID-19 in pediatric dentistry by testing children during their visit at the ...

PORTO ALEGRE, Brazil: Since SARS-CoV-2 has been found in different sites in the human body, researchers have recently sought to examine the presence of the ...

In the absence of a dental market response to the SARS-CoV-2 pandemic, Dr Mustafa Ayna, a Germany-based dentist who heads his own practice in Duisburg, ...